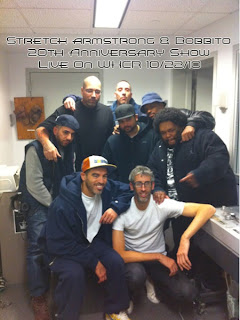 Here's treat for you all you JS-NYC hip-hop heads on Halloween. Personally, nothing about the holiday makes me want to leave the house. If you feel the same way, here is a fine way to enjoy the great indoors on a Sunday: the WKCR 20th Anniversary Stretch and Bobbito show from 10/22 distilled down to four and a half-hours of digital delight.
I can't front and say that I listened to Stretch and Bobbito with much regularity when they were on the air, but I heard a lot of the freestyles from the show piecemeal on mix tapes through the years. Once the internet starting jumping off hard, more and more reasons to listen started accumulating on my hard drives and I began to snatch shows up as I found them. NYC owned hip-hop in the late 90s, and many of my hip-hop heroes were regulars on the show, like Large Professor and Lord Finesse, and a gang of people got their first airplay on their show, like Big L (who brought Jay-Z for the first time) and WuTang.
The show has been off the air for a minute, but Stretch and Bobbito got the crew back (word to Lord Sear) together for almost six hours of anniversary show that is a must for any fan of real hip-hop. The shit is straight fucking bananas. Even given the JS-NYC flair for hyperbole, it cannot be overstated how much this recording is a truly seminal document of hip-hop history. Download it here, courtesy of the indisputable best site in hip-hop: Unkut.com.
R
Posted by Jaded Scenester NYC at 11:42 AM