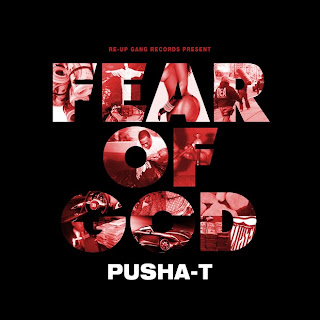 Your boy Pusha has had a pretty good year or so. Even if your first exposure was on Runaway, you'd be a fool to dispute that the VA boy is nice with his, but the Kanye connection has really taken T to the next level. This mixtape comes courtesy of Re-up Gang and Whoo Kid and has a dozen tracks (as well as the obligatory Scarface intro) that should do pretty well when it comes to whetting peoples appetite for the Pusha T debut on Good Music.
As you might surmise, the drug game is often referenced, as are the spoils and female companionship that results from such entrepreneurial endeavors. Rick Ross shows up to kill a verse with Ab-Liva, while Pharrell and 50 bring big guns but ultimately don't do so well. The young people may feel differently. Ye shows up for a track that is definitely not on the level of Runaway, but does bode well for another solid collabo when the new record drops. Pusha is definitely one of the sharpest out there, but the lyrics don't carry the tired mid-tempo vocoderisms of Cook It Down. I wouldn't call this a must-own, but if you rep for the Re-Up, you could do a lot worse than Fear Of God.
R
Posted by Jaded Scenester NYC at 4:32 PM No comments: 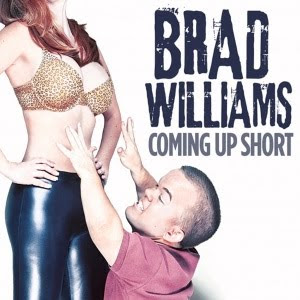 I picked this up as a matter of practice for the comedy column. Lets be clear from the jump: I think we both know that if I had been able to rub two brain cells together and made the connection between the title and the fact dude was a midget, I would have passed this over like a free pass to a Demetri Martin set. Much like most fat comedians (Louie Anderson, Gabriel Iglesias), that aren't the great Ralphie May, the human sight gag gets old after five minutes at best and you just wish they would die. Or maybe that's just me.
Brad Williams is a midget. He talks about it a lot. Luckily enough he's pretty funny. I hadn't heard him before, although (and from where I'm sitting, because) he evidently has done a lot of stuff on Mind Of Mencia. He is tailor made for the gig, if only because Mencia can't steal midget jokes. I'm not sure whether he's got anything in him past this record, but Coming Up Short has a bunch of good bits that will more than satisfy any average person's curiosity about midget sex, dating or nome (gnome? sorry..)nclature. He's funny enough that he shouldn't have had to resort to calling the record Coming Up Short, but marketing is marketing. If you're not an asshole like me, get your copy and keep tabs on all things Brad Williams here.
R
Posted by Jaded Scenester NYC at 5:00 PM No comments: 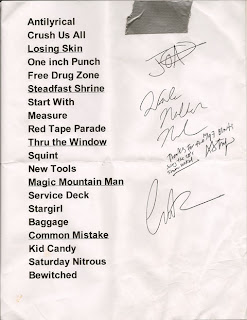 I'm no David or Jim Wilbur, but I like me some Seaweed. It had been a long damn time since I had seen them, and Aaron mentioned it had been ten years since they'd been East. I can only assume that the show was the lackluster SESAC showcase at Coney Island High, a memory that didn't portend all that well for a one-off fly-in show on borrowed gear. In fact, the poor sound for the first couple songs did little to diminish my crankiness over having ridden out to the wilds of Brooklyn. Luckily, by the time Losing Skin jumped off things were firing on all cylinders and Tacoma's finest dispensed with the ass-kicking for the duration.
Seaweed have songs. Check that set list, kids, and know that while some pounds have been added to various frames in the franchise, these veterans can still bring it. I'd like to see them and Samiam do some touring together. There's a new Seaweed record coming, so lets hope that the planets align and its not just on the West Coast.
R
Posted by Jaded Scenester NYC at 5:01 PM No comments: 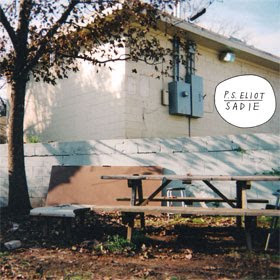 I'm not sure how P.S. Eliot came on my radar, but they have got a fair amount of spin around JS-NYC HQ over the last year or so. The local ladies have been kind of bringing it in recent years (Little Lungs, Measure (sa), Bridge & Tunnel) so I can only assume some string pulling from one of them got them our way. Either way, the record release for Sadie was a good time and the new songs sound pretty great.
Twelve songs, with the title track and Pink Sheets standing out. Shitty and Tragic is pretty aces as well. Lovers of the post-Deal era of lady rock will find much to like about Sadie. As at least one member still hails from Birmingham, I'm not sure how actively PSE are going to be touring behind this, but see them if you can and pick up Sadie from If You Make It or buy the vinyl from Salinas here.
R
Posted by Jaded Scenester NYC at 4:39 PM No comments:

Labels: If You Make It, P.S. Eliot, Sadie, Salinas Records 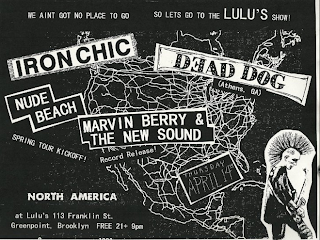 This ended up being quite the evening. Ran into Col on the ride home and ended up meeting her at an opening on Bond St, then rode out to Brooklyn for a couple hours at Eric's birthday get-together before this show.
Was pretty full when I rolled. I caught all of the Dead Dog set, who had some sound issues and were all and all pretty meh when you get right down to it. There was a decent crowd, and as you couldn't beat the price, I guess it makes sense. Pretty decent set from the Chic ones. Lots of beer being thrown and a fair amount of stupid poseur stage diving/crowd riding. Iron Chic have songs, and good ones at that. It's great that they are getting bigger, but the douche factor does seem to be rising amongst the crowds. Either that or I'm too old. One or the other. While I'm being cranky, headliners going on past midnight on a school night seems a little silly. I guess it was free, and it's not like it wasn't packed, so maybe I should just clam up. And use the bathroom before I leave, as the awesome ticket I got was not really what I was dying to get for my birthday. Kudos to Iron Chic for being pretty great. It's nice that its getting warm just as NYC is finally getting some good local bands. May looks like it is going to be merry, indeed. Stay tuned to JS-NYC for details.
R
Posted by Jaded Scenester NYC at 6:34 PM No comments: 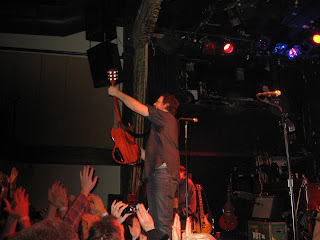 All:
My review of the record release show at Bowery for the latest Drive By Truckers record Go-Go Boots is up currently at Skyscraper.
Here's a link.
Thanks to Traci Thomas at Thirty Tigers for the guest list, ATO for the spot and Andrew at Skyscraper.
R
Posted by Jaded Scenester NYC at 4:52 PM No comments: 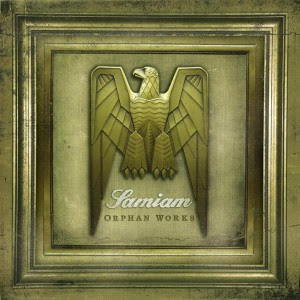 JS-NYC Massive:
My review of the new Samiam singles comp Orphan Works is up at Skyscraper.
Here's a link.
R
Posted by Jaded Scenester NYC at 4:49 PM No comments:

New Punch Line up at Skyscraper

Chuckle Aficionados:
The second installment of my comedy column The Punch Line is currently available for your collective perusal at the Skyscraper Magazine web presence.
Here's a link.
R
Posted by Jaded Scenester NYC at 4:47 PM No comments: 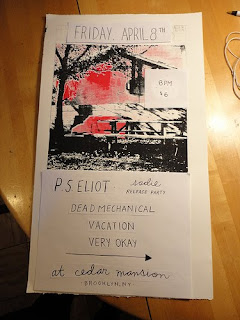 This show popped up on the Pop Punk Bored and bode well for a good evening. JS-NYC likes themselves a whole lot of Dead Mechanical and P.S. Eliot, and as both parties play pretty infrequently in town, much less together, it seemed prudent to make it out to Cedar Mansion for this.
Cedar Mansion is a pretty nice layout, with a basement that is pretty well-suited for seeing shows. The stairs are somewhat of a sketchy proposition, but CM keeps the numbers down and everything ship-shape. Vacation were rolling when I made it downstairs, sounding a lot like Tin Armor. Believe they are from Ohio. Seemed like good dudes.
Dead Mechanical played to a smaller crowd than I would have expected. They always bring it live, and I would have figured the Jawbreaker in them would have filled the room up more, but they blazed through seven or eight corkers over their short set. I'd like to see them and Deep Sleep down Charm City way.
This show was the release show for Sadie, the new P.S. Eliot record and boy did the room fill up accordingly. Even Katie seemed surprised at the draw. They knocked out most of the (good) new record and a couple older tracks to a more than stoked crowd. Champagne was decanted, good times were had. Get the new record in tangible form from Salinas and/or snag it gratis from your buddies over at the venerable If You Make It.
R
Posted by Jaded Scenester NYC at 6:28 PM No comments: 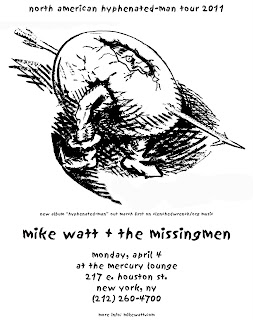 I had missed out on the last Watt show at Mercury, and as I'm not the hugest Stooge-ophile and the improv stuff doesn't often make it to this side of the country I went out of my way to get a ticket in advance. It was sold out, as it should be and packed in pretty good by the time I arrived.
Watt's new opera is called Hyphenated Man and it's out courtesy of your friends at Clenched Wrench. This set was the new record in its entirety, along with some choice Pop Group and Minutemen covers on the back end. Set list is here. Hip room, with Nels and Yuko in attendance, as well as the usual old school NY suspects. Raul and Tom are the best guys he's had behind him since Nels was in the band and they certainly seemed tight, despite Watt claiming that he blew clams for most of the set.
Tour is on til 4/30. Get dates and all things Watt at the hootpage here.
R
Posted by Jaded Scenester NYC at 6:29 PM No comments: 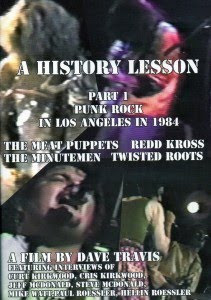 Ladies, Gents, L.A. Punk cognoscenti:
Review of A History Lesson: Punk Rock In LA In 1984 is now up at the Skyscraper. Here's a link.
Thanks to Andrew and Diana at Skyscraper.
D. Boon!
R
Posted by Jaded Scenester NYC at 4:36 PM No comments: