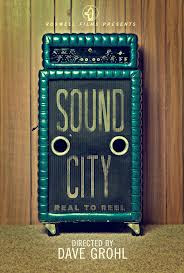 Since I decided that Time Warner could go fuck themselves a couple years ago, its been mostly music docs and podcasts on the entertainment docket at JS-NYC Corporate HQ and research seems to reveal that this has been an all-around positive move. It certainly helps that the last couple years have been very good for rock doc-ery. I finally got around to seeing Beats, Rhymes and Life last week and am eagerly looking forward to the Silkworm doc due to drop next week.

Word had come down through internerd channels over the past year or so that Grohl had managed to acquire the bespoke Neve 8028 console from the legendary Sound City studios for his own studio complex and had set to recording with a number of the artists that had recorded through the board, like Fleetwood Mac, CCR, Rick Springfield and Ratt, to name but a few. Updated skinny revealed that a documentary about the history of the legendary space has followed in short order, setting the non-studio world on its ear in the process. Docs on failing recording studios aren't my favorite topic in the whole world currently, but Sound City isn't your average studio, nor is Dave Grohl your average documentarian. Truth be told: he's not really one at all, but its not like Grohl puts on airs and gets all Ken Burns here.

Beyond the initial win of being named after the first Marillion live record, Sound City: Real To Reel captures the rise and fall of Studio City with equal parts laughter and tears (check the hysterical Rupert Neve interview portion with Dave Grohl internal monologue). And at $12 bucks, you could do a whole lot worse than to keep up with the Sundance set and grab yourself a copy. Use this link and bask in the nostalgia.