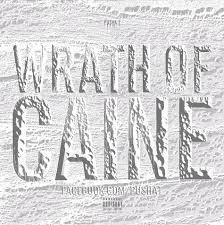 It's been well over a decade since the Bros. Thornton exploded out of VA with Grindin'. Since then, we've seen some dramatic changes in the Clipse franchise, most notably the conversion of Malice to Christianity, a change that begs the question as to how these proponents of cocaine rap will continue in the vein (pause) that they have previously.

While his brother pursues higher minded paths, rest assured that Pusha T continues to spit the drug raps, as evinced by the enchanting cover art for Wrath Of Caine. He's down with your boy Kanye and his GOOD Music collective, a affiliation that keeps him on a decent profile to the crossover hip-hop community. There's a new record called My Name Is My Name coming down the pike soon, but in the interim we have this new mixtape to build anticipation.

Wrath Of Caine lives up to its label's name in that it is definitely good, but far from great. There are guest spots from Rick Ross (yawn) and French Montana (what is the appeal?) to get the young heads all worked up, plus old school cronies like Ab Liva and Wale for those that have followed the Re-Up for a bit. Pusha is in pretty good form and can still unleash a serious verse or two when called upon, see: Blocka, but I can't say I'm going to go out of my way to listen to this again.