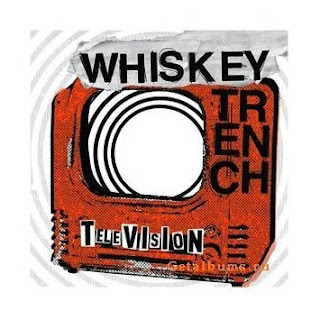 Ah, Whiskey Trench! If I may digress from the onset, it's fairly irritating how much of a dick tease the internet can be. As it regards Whiskey Trench, for a while now I've been trying to figure out if Hugo Mudie is still in this damn band? Given the terse assertion that he is not on the web page, I'm given to think that I am right that he was, but that some sort of acrimony has facilitated his departure from the WT ranks. Not that Whiskey Trench are Rush or anything, but it'd be nice if there were somewhere one could get the skinny on the current lineup.
Not that I'm such a slavish Mudie jocker that I would disregard the band if he wasn't a member, but truth be told, The Sainte Catherines/Yesterday's Ring connection was the reason I got into the band in the first place. I grabbed the first Whiskey Trench record from the download section of If You Make It last year and was pretty taken with the Canadian inflected Jawbreaker-isms therein. Television keeps that legacy alive, adding a little Ben Deily era Lemonheads to the mix to keep things interesting. There is also an interesting Green Onions meets Planet Of Sound kind of instrumental turn on No Money For Bus Fare that heralds some interesting directions in the band's future. The fourteen tracks are all pretty sold, with Vicious Sore and Life Long Sentence taking the top two slots to these ears. As luck would have it, the gents are playing Bar Nine tomorrow night, so it appears I'll be able to get to the bottom of the Hugo thing and see if Whiskey Trench can pull it off live. See you front and center at the rock show. If you can't make it out, check the record out at their web presence or just buy Television from Kiss Of Death. Think about maybe buying two. It's the perfect holiday gift.
R
Posted by Jaded Scenester NYC at 12:00 AM

Hugo Mudie never was in Whiskey Trench. There's a different Hugo in the band.

Dog sweaters are Abercrombie Polos available in styles ranging from v-necks to Abercrombie Polos turtle necks and of course everything in ed hardy Hats between including hooded sweaters as well as knit ones. When it comes to your dog's Ed Hardy Sale warm dog wardrobe selections, sweaters are definitely a must have item.When Ed Hardy Swimwear the nights get even colder though and the basic sweater will just not do it for your dog, then Ed Hardy Swimwear you may be in need of a jacket or coat as well. There are Ed Hardy Swimwear many of these available too and they come in styles like checker trench coats, fabulous ed hardy swimsuits fleece jackets as well as promenade faux fur coats styles.