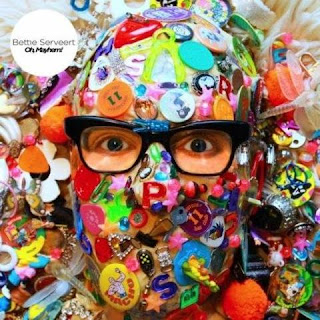 Back in the days when Matador and indie rock were king, Dutch quartet Bettie Serveert rode a wave of feedback into my life in the early 90s and stayed there for the better part of the rest of the millennium. I'm not sure whether it was my girlfriend at the time that introduced me to them or whether it was their opening slot for Buffalo Tom on the US tour behind their debut Palomine, but I definitely drank the KoolAde. Their 90s output resonated the strongest with me, but in touring the stacks at JS-NYC HQ, I definitely picked up all the records save for the Velvet Underground tribute as they dropped and saw my fair share of their stateside live shows. I'm pretty sure I missed out on the last set of US dates six or seven years ago owing to some sort of visa cancellation, but it was a pleasure to hear they had a new record in the breach.

In perusing the promo materials for the new (sadly, non-black metal-centric) Oh, Mayhem it was funny to see Peter wearing a t-shirt from Chapel Hill indie rock stalwart Local 506. Turns out that isn't so much of a coincidence, as in pulling the string, it appears that the new record is coming courtesy of North Carolina label Second Motion, itself part of a consortium that also includes Blurt Magazine and Triangle brick and mortar mainstay Schoolkids Records. Having dated the loveliest woman in Raleigh in the mid-90s, it was a pleasure to find that the Triangle remains a bastion of good musical taste.

Said promo materials also made the ominous proclamation that the band arrived in the studio with only a handful of songs and finished the record in the studio, a statement from the average band that historically means we are going to get ourselves an (at-best) half-baked stopgap release. As such, it took a bit to get this through the review cycle, but eight or ten spins in, I'm pleased to report that our Dutch friends still have it. The guitar flexing is scaled a little further back than I'd prefer, but all in all Oh, Mayhem is another strong release from the Amsterdam quartet. Hooks abound in all 10 tracks, and if there was still radio, I could see a good number of these tracks blasting from car radios all around this fair nation of ours. Blogs and earbuds are probably a much more likely eventuality, but regardless of the way you get Oh, Mayhem into your head, there is very little chance of it leaving for a very long time. Or your complaining, for that matter.

Keep track of goings-on in the Bettie Serveert camp here and get a virtual or actual copy of Oh, Mayhem via this handy link. Here's hoping we see them in NYC very soon.